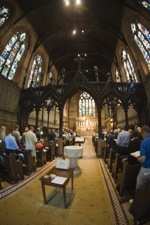 New York City – The General Theological Seminary of the Episcopal Church (GTS) has been selected to produce the 2011 CBS Christmas Eve television special to air nationwide on December 24th at 11:30 pm (EST). Nearly all the network’s affiliated stations carry the annual Christmas program and so viewers are expected to number in the many millions. The 194-year-old seminary is known for the beauty of its Episcopal liturgy and music as well as its idyllic campus located in the Chelsea district of New York City on a square block known as Chelsea Square. The heart of the hour-long program will be a service of lessons and carols from the Seminary’s historic Chapel of the Good Shepherd. During the service members of the Seminary community will offer readings from scripture, interspersed with Christmas carols, choral works, and other musical performances featuring pipe organ and woodwinds. Bishop Catherine S. Roskam, who this year retires as Bishop Suffragan of the Diocese of New York and is herself a 1984 graduate of the Seminary, will host the opening of the program. The Presiding Bishop of the Episcopal Church, the Rt. Rev. Katharine Jefferts Schori, will deliver the homily and the Rt. Rev. Peter James Lee, Dean of the Seminary, will introduce viewers to the Seminary’s mission.

In addition to liturgy and music from the Chapel, the special will feature insightful commentary on the scripture readings from members of the Seminary faculty, as well as an interesting segment featuring Christmas carols played on the chimes located in the Seminary’s bell tower. Another segment features excerpts from the beloved poem by Clement Clarke Moore which begins, “Twas the Night Before Christmas.” Moore was a professor of biblical languages at the Seminary.

“Although Christmas specials are often worship services held in large congregations, the Seminary, not being a parish church, has taken a different approach,” said Bruce Parker, Senior VP at the Seminary who is heading up the project, assisted by a video team consisting of faculty, students, and staff. Music and scripture will form the central part of the program but will be supplemented with other video segments about aspects of life on Chelsea Square at Christmas time, Parker explained.

On the evening of November 10th from 7-9 pm, a “staged service” will take place in the Seminary’s Chapel during which a large part of the program’s content will be filmed. Beautiful Christmas music will be performed, Christmas carols sung by a congregation comprised of the GTS community and guests, and lessons read from scripture but the service will be interrupted as needed for retakes and repositioning of equipment and lighting. “This Christmas Eve special is a wonderful way to share the beauty of Episcopal worship with a large viewing audience, as well as sharing the mission of the Seminary and the mission of the Episcopal Church,” said Seminary president, the Rev. Lang Lowrey. “We also expect the November 10th filming will be a lot of fun for the congregation.”

An advisory team, convened by Parker, has been at work on the project for several months. Team members include Dr. Patrick Malloy, Professor of Liturgics, who is coordinating the liturgy for the service; Dr. David Hurd, Professor of Church Music, who serves as musical director for the program, as well as Professor of Preaching, Dr. Mitties DeChamplain; GTS Director of Communications, Chad Rancourt; and Director of Admissions, William Webster. As the project gears up to begin filming, students will soon be added to the team. John P. Blessington, who has produced the network’s Christmas specials since the 1980s, serves as Executive Producer for CBS, and President Lang Lowrey is serving as Executive Producer for the Seminary. In addition, Mike Collins, Director of Digital Media for the Episcopal Church’s denominational headquarters, is serving as technical director for the program. “The Seminary is extremely grateful to Mike for the production expertise and services his office is providing to the Seminary both in the shooting and editing of this program,” said Parker. Parker also thanked General graduate, Marion Williams, for bringing this project to GTS through her connections with the CBS Cultural and Religious Broadcasts Unit.

For those who are in church on Christmas Eve and are unable to set their video recorders, the Seminary will be making DVDs of the program available and may stream portions or all of it over their website. Friends of the Seminary are most welcome to attend the November 10th filming although seating is limited. Those wishing to attend should contact Bruce Parker at bparker@gts.edu or 212-243-5150 ext. 285.

The General Theological Seminary, located in the heart of New York City, educates and forms leaders for the church in a changing world. Founded in 1817 as the first theological seminary of the Episcopal Church, General offers certificate and degree programs including the Master of Divinity, Master of Arts, and Doctor of Theology. The Seminary is also home to the Desmond Tutu Center, a full-service conference center with sixty modern guest rooms.