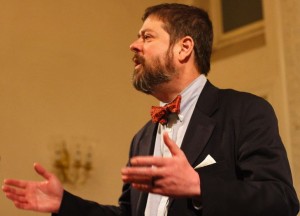 Robert Bruce Mullin, General Theological Seminary’s Society for the Promotion of Religion and Learning Professor of History and World Mission and Professor of Modern Anglican Studies, has received the honor of being elected by the bishops of The Episcopal Church as the church’s official historiographer. He was nominated to the position by Presiding Bishop Katharine Jefferts Schori and elected by the House of Bishops during the triennial General Convention held in Indianapolis this summer.

The office of historiographer goes back to 1838, when the church recognized that the records of its founding were being lost and responded by creating the ministry of official historiographer.  The directive to the first historiographer, Samuel Farmer Jarvis (1786-1851), was to prepare “from the most original sources now extant, a faithful Ecclesiastical History, reaching from the Apostles’ times, to the formation of the Protestant Episcopal Church in the United States.” Today, in part, the office honors a historian for long-standing service to the church.

Professor Mullin is the third GTS scholar to hold the position. Previous historiographers included Jarvis, who joined the faculty in 1819, and J. Robert Wright, who recently retired as the seminary’s St. Mark’s Church in the Bowery Professor of Ecclesiastical History. “My immediate predecessor, Bob Wright was renowned for his work in ecumenism, and Presiding Bishop Frank Griswold made much use of him,” Mullin noted.  “I have, for the past six years, served as a historical consultant to the Chancellor’s Office of The Episcopal Church in church property and other legal cases. This work continues, but thankfully the courts have thus far upheld the authority of The Episcopal Church to hand down its property through the generations and to govern in matters of church discipline.”

Professor Mullin is presently engaged in a study of the development of The Episcopal Church as an organization from the 1780s to the present, research that informs his work for the national church. Author of seven books and numerous articles, he is a scholar whose areas of specialty include American religious history, the history of Anglicanism and The Episcopal Church, denominationalism,  the history of American theology, and miracles.