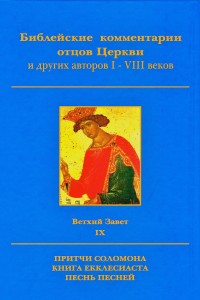 he contribution of the Rev. Can. Prof. J. Robert Wright to the Ancient Christian Commentary on Scripture, a volume on Proverbs, Ecclesiastes, and the Song of Songs, has now been translated into Russian.

According to the publisher, InterVarsity Press, the series is a post-critical revival of the early biblical commentary tradition among the early Church Fathers and Mothers known as the glossa ordinaria, in which commentators on Scripture would interpret the meaning of a word or text in such a way as to encourage theological reflection and spiritual reading. “It is increasingly seen as insufficient merely to learn the original settings of the books of the Bible,” notes Fr. Wright, “without also studying their meanings, often their diverse meanings, attached to them by the patristic writers, especially in the formative period of the early church.” For each volume in the series, an editor with a deep knowledge of the writings of the Church Fathers and Mothers, and a heart for the church, chose the material to present, translating, shaping, annotating, and introducing it for today’s readers.

This editorial work involved major scholarly endeavor. For Proverbs 8:22-23, for example, Fr. Wright researched and translated 28 passages of commentary from 16 different patristic authors who wrote mainly in Greek or Latin, and arranged them so that the historical development of interpretation could be studied and pondered. In these verses, he notes, one finds a female figure of personified Wisdom that later became identified with Christ as God’s Word incarnate in patristic Christology. Similarly, he presented 20 passages of exegesis/commentary on Song of Songs 1:5-6, constituting the most extensive and sophisticated group of reflections on the subject of race and skin color in the history of the early church.

First published in 2005 and hailed as a significant accomplishment, Fr. Wright’s 463-page volume in English has sold over 18,000 copies. The work has been translated into Italian, Spanish, and now Russian, and future translations are planned into Arabic and Chinese. The Russian edition of the Ancient Christian Commentary on Scripture has been published through Hermeneutica Press of Tver, Russia.

The cover of the Russian edition depicts a Russian icon of King Solomon, regarded as a saint in the Orthodox churches, wearing a crown. King Solomon has traditionally been regarded as the author of much of the Wisdom literature of the Old Testament. Proverbs, Ecclesiastes, and Song of Songs constitute the major legacy of the Old Testament Wisdom literature.

“There is an increasing interest among theologically literate persons in the meaning of the Bible: what it may have meant to its original authors, what it meant to the writers of the early church, what it has meant over the whole spectrum of church history and especially in differing cultural and geographical spheres, and what it has come to mean in various church traditions,” adds Fr. Wright. “And, too, what it means to you and me, and, of course, how we can know what God may mean by it if we believe the Bible to be God’s word to us.”