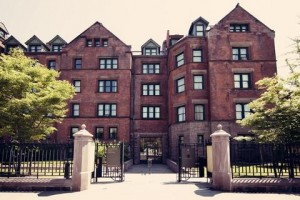 New York City – The Rev. Lang Lowrey, President of The General Theological Seminary (GTS), announced September 13, 2012, that the Seminary has closed on the sale of the “hotel” portion of the Desmond Tutu Center. Opening in 2005, the hotel facility consists of 60 guestrooms at the corner of Tenth Avenue and 20th Street in Chelsea. Only this guestroom section of the Desmond Tutu Center is included in the sale. The Desmond Tutu Conference Center, comprising the seminary’s refectory, or dining hall, two large conference spaces named the Matthews and Rusack Rooms, and the many smaller breakout rooms, are not included in the sale, will continue to be owned by GTS, and will remain an integral part of the Seminary’s complex of historic buildings that stretch along 21st Street from Ninth to Tenth Avenues.

In October 2010, Seminary trustees approved the sale of the hotel facility along with several other properties, as part of the Seminary’s Plan to Choose Life, a comprehensive financial initiative designed to eliminate debt for the 194-year-old institution, rebuild its endowment, finalize plans to achieve a balanced budget, and revitalize its mission. Both the conference center and hotel, an adaptive reuse of two historic properties built in the 1890s by Dean Eugene Augustus Hoffman as part of “Dean Hoffman’s Grand Design,” will continue to be used to accommodate the seminary’s conference and hotel needs.

Partnering as the new owners of the newly named Highline Hotel are The Brodsky Organization and MCR Development, both headquartered in Manhattan. The Brodsky Organization is a family-run real estate development and management firm, now in its third generation of leadership. With Daniel Brodsky serving as Managing Partner, The Brodsky Organization, founded in 1951, is one of New York City’s most respected developers of residential properties. MCR Development is a hotel ownership company with a portfolio of 20 hotels in ten states, all of which it owns and manages. Tyler Morse, the CEO, has been leading MCR Development since its inception. The firm made national news the week of January 22, 2010, for donating 5% of all its room revenues nationwide to the relief and recovery effort in Haiti.

Gratitude Expressed to All Constituencies

In announcing the sale, President Lowrey praised Seminary trustees, staff, faculty, and students for their support of the Plan. “Many of us have spent long hours weighing a bewildering number of possible financial options and analyzing related legal documents. Others have worked tirelessly to come up with creative solutions to seemingly insurmountable problems that just two years ago brought us to the brink of insolvency,” Lowrey said. “Lastly, those who live and work on our beloved campus have endured months of noise, dust, and construction to make this Plan a reality.”

Besides the elimination of an unsustainable level of debt, the proceeds from the successful completion of the Plan to Choose Life have enabled the Seminary to fully renovate four of its aging dormitories, to create brand-new administrative offices and classrooms in Seabury Hall, to complete the build-out of the new, state-of-the-art Christoph Keller, Jr. Library, and to eliminate much deferred maintenance. Just as importantly, three new members have been added to the Seminary prestigious faculty, and General’s endowment is now almost twice what it was in 2010. Significant progress has been made in the area of distance learning and three video conferencing sites have been added to the classrooms and library. The Seminary’s garden or Close has been largely renovated with improved sidewalks and other amenities. Currently underway are widespread improvements in security, exterior lighting, and improved access for handicapped persons.

Additionally, in an effort led by the seminary’s new Chief Financial Officer, Sandra Johnson, new policies and procedures have been instituted to safeguard the Seminary’s financial resources. The school has monetized its endowment and reduced its “draw” on these funds to 4%. A multi-year reserve of operational funds has also been set aside for the future. Over the two years of the Plan, a working team of professionals has been established to manage and grow General’s endowment, and new software and financial systems have been initiated in the school’s business office.

“I have been privileged to serve in this time of amazing turnaround for General Seminary,” said President Lowrey, who arrived at the Seminary nearly two years ago.  “As I begin this year of transition, when the trustees will select new leadership to assume responsibility for the dynamic new strategic plan they are currently developing, I am so very proud of what we have accomplished together.” Noting that GTS must continue to pursue good financial stewardship, Lowrey added, “We just need to remember that the Seminary is by no means fully self-sufficient financially. We must increase the endowment, and we still have a material way to go to reach a balanced budget.”