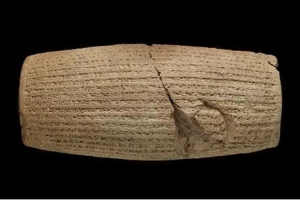 The Cyrus Cylinder, a small, cylinder-shaped baked clay tablet inscribed with Akkadian cuneiform from the 6th century BCE, is arguably one of the most important texts and objects from the Ancient Near Eastern world. Sometimes called “the first declaration of human rights,” the Cyrus Cylinder, housed at the British Museum, is currently touring museums in the United States, and will be on display at the Metropolitan Museum of Art in New York City beginning June 20.

In connection with this traveling exhibition, Dr. Robert Owens, Professor of Old Testament at The General Theological Seminary, offered a free webcast entitled “Cyrus Cylinder and the Significance of Cyrus in the Biblical Tradition” on June 18, 2013.