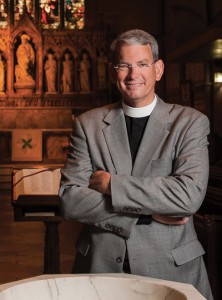 The Rev. Kurt H. Dunkle was elected on May 14 as the 13th Dean and President of The General Theological Seminary in New York City by the GTS Board of Trustees. He will officially begin serving in his new position on July 1, 2013.

In his address to the Trustees following his election, Dunkle said, “We need to return importance to the word ‘General’ in our title; we are The General Theological Seminary. We are the seminary for the entire church, not just one aspect or discrete group. We need to embrace the meaning and importance of being The General Theological Seminary in preparing for the leadership of the entire church.”

Dunkle voiced another goal for his first year: to make sure that General is “joyful, thankful and useful–joyful in serving our mission of creating real leaders for the 21st century church; thankful to God for providing us this wonderful opportunity for ministry in Jesus’ name; and useful to the Episcopal Church. I am so excited to see how this joy will unfold, how we can be most useful to growing our faith communities. This is a wonderful time to be an Episcopalian and a great time to be at General. Alleluia!”

Born in 1961, Dunkle is a native Floridian and cradle Episcopalian. He and his wife, Cathleen, have two daughters; Caroline is a rising senior at the University of Florida in Gainesville; and Maddie is a rising sophomore at Wofford College in Spartanburg, SC.

Dunkle served as Rector of Grace Episcopal Church in Orange Park, Florida, a parish which experienced significant growth under his leadership. Just before his arrival in 2006, 965 of the 1,000 members had left the parish because of disagreements with The Episcopal Church. Today, the parish has over 500 members, an average Sunday attendance of almost 200, an expanding parish day school, a new organ, and emerging programs and parish life created from scratch. “I like to grow things and people,” Dunkle said.

In his first call after ordination, Dunkle served as Canon to the Ordinary in the Episcopal Diocese of Florida, with responsibilities for staff administration, deployment, and representing the Rt. Rev. Samuel Johnson Howard in all aspects of diocesan life, particularly managing clergy and congregational conflict.

In addition to his service within the Diocese of Florida, Kurt has served the wider church in a number of important roles: Appointed by the Presiding Bishop, Dunkle is a member of the Board of Governors of the Anglican Centre in Rome and serves as the Chairman of the American Friends of the Centre. In addition, he has been a Deputy to General Convention in 2009 and 2012 and a member of the Constitutions Committee of General Convention in 2012.

Dunkle is a 2004 graduate of General Seminary, where he earned the Seymour Prize in Preaching and served as a member of the Admissions Committee. Previously, he worked as a partner at Rogers Towers, the largest law firm in Jacksonville, Florida. He earned his Juris Doctorate from the University of Florida’s College of Law, where he served on the Editorial Board of the university’s Journal of Law and Public Policy, and his bachelor’s degree from Duke University.

Dunkle believes one important characteristic of General Seminary’s future mission will be to teach leaders how to help faith communities thrive. “Right now, one of the fundamentals largely missing in seminaries is how to grow the church in numbers of participants and in depth of engagement with Jesus Christ,” he said. “Training leaders to grow people and institutions–not just maintain them or even manage the decline gracefully–is essential in our Episcopal Church today. The Church and General should not just focus on survival; it’s about thriving. We need to develop a culture where thriving is the norm, and having more people in our Church with an increased focus on Jesus is the key to thriving.”