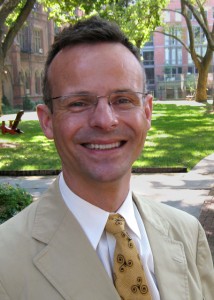 GTS welcomes Dr. Andrew Irving as the new Assistant Professor of Church History. After completing an undergraduate degree in French and German, Irving studied pastoral theology at the College of St. John the Evangelist, the Anglican seminary in Auckland, New Zealand, his home country. In the United States, Irving completed a masters degree in liturgical studies at the University of Notre Dame before undertaking doctoral studies in the Medieval Institute, an interdisciplinary research institute of Notre Dame.

Irving’s research on the production and use of liturgical manuscripts at the Abbey of Montecassino in its golden age at the end of the eleventh century has led him to extensive work at the Abbey, and at numerous other regional and national manuscript libraries in Southern Italy and across Europe, and he is currently preparing his dissertation entitled Gospel Books in Eleventh-Century Montecassino: An Archaeology for publication. In 2012-2013, Irving began a new research project on the material aspects of the transformation of the Missal in the twelfth-century as a post-doctoral associate of the Institute of Sacred Music at Yale University. In addition to his research interests in liturgical manuscripts, monastic cultures, and medieval liturgy, Irving is turning his attention to material culture and archaeological approaches to the study of early and medieval Christianities.

Irving has taught church history, historical theology and liturgy at Trinity University College at the University of Toronto (visiting lecturer), Huron University College in London, Ontario (lecturer), and for the University of Otago at the College of St. John the Evangelist in Auckland, New Zealand (visiting lecturer). He has also taught courses in classical and medieval Latin at the University of Notre Dame. He is a member of the Medieval Academy of America, the American Society of Church History, the North American Academy of Liturgy, the North American Patristics Society, the Association Paléographie Internationale, and a founding member of the Society for Beneventan Studies.