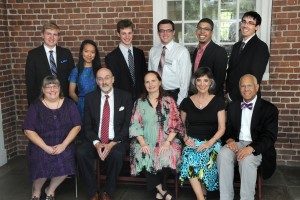 Dr. David Hurd, Professor of Church Music at The General Theological Seminary, recently joined fellow concert organists, Diane Meredith Belcher and Cherry Rhodes, in performing at the 16th Annual Albert Schweitzer Organ Festival and judging performance competitions for high school level and young professional organists.  The stated purpose of the Festival is “to enhance the area of organ education–both to support young people studying the organ and to increase general appreciation for organ music of the past and present.”  Modeled after the Albert Schweitzer Organ Festival in the Netherlands and founded in 1979, the U.S. version is hosted at First Church of Christ, Wethersfield, Connecticut, and directed by its Minister of Music and the Arts, David Spicer.

Each finalist performed three major compositions and two hymns with separate prizes being awarded in each division for excellent hymn-playing. The quality of performance was consistently very high.  In addition to the six hours of competitive organ-playing, the Festival included a “Celebration Concert,” a service of worship, field trips to the Austin Organ Factory and St. Joseph’s Cathedral (RC) in Hartford, a master class led by the judges, and several delicious meals prepared by Dana Spicer.