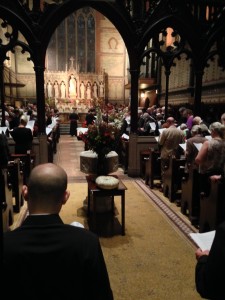 New York City – On the evening of October 17, 2013, during a Festive Eucharist in the Chapel of the Good Shepherd, the Very Rev. Kurt H. Dunkle was installed as the thirteenth Dean and President of The General Theological Seminary. Witnessed by nearly 300 attendees, the symbols of the office were conferred on Dunkle by the Chair of the GTS Board of Trustees, the Rt. Rev. Mark S. Sisk, retired Bishop of New York.

After testimonials from representative bodies including his family, the faculty, the GTS trustees, his ministry, and the GTS class of 2004, the Dean-Designee was asked by the Chair, “My brother, do you believe that you are called by God to serve the Church as the Dean and President of this Seminary?” to which Dunkle replied, “I believe I am so called.” After pledging to faithfully minister as the President and Dean of the Seminary, Dunkle had bestowed upon him the robe and medallion of the Dean’s office and was then led to the formal Dean’s seat in the chapel. These seats in a chapel are called “stalls” and, as such, the Dean was in-stalled at this time.

The Installation of the Dean is a traditional event which brings together the GTS community and the wider Church to witness the formal conferring of the office and to promise to support the Dean in his work. Dunkle was nominated by the Board of Trustees in February and elected by the board in May. He has been serving as the Dean and President of General Seminary since July 1.

In his acknowledgments for this occasion of installation, Dunkle expressed “his great thanks to the students, faculty, trustees and staff of The General Theological Seminary for the warm welcome he has received back into the community, and for their energy and support in preparation for this liturgical marking of our new life together.”