Scholars of Early Christianity from nearby universities and seminaries, laity, bishops of The Episcopal Church, advocates for women, and General Seminary neighbors, graduates, professors and students, filled Seabury Auditorium on November 18, 2013, for Two Scholars Imagine The World of Early Christian Women, an evening with Kate Cooper, award-winning Professor of Ancient History in the University of Manchester, and Deirdre Good, GTS Academic Dean. 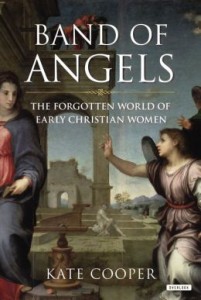 Their conversation focused on Cooper’s new book Band of Angels: The Forgotten World of Early Christian Women, which follows the lives of women across the first centuries of the church. The book reveals how women from all walks of life, from peasants to empresses, played an invaluable role in Christianity’s growth.

Cooper started the evening by introducing what led to her explorations of the contributions of Early Christian women. Her quest began when she was a committed lay leader at the Church of the Holy Apostles in Manhattan in the 1980s. She wondered about her particular role, as a lay person and as a woman, within the faith community. Also influential, she said, were memories of her mother sharing faith beliefs, especially after the death of her grandmother. “I realized that I had learned about faith, hope and love through oral tradition. My mother’s attempt to explain to me, at age five, what heaven was created space for me. This is what theology is, thinking about death, thinking about love, in a family setting, in a community setting, creating space for people’s lives to be meaningful.”

From these musings, Cooper realized that, although marginalized and often invisible in recorded history, women must have been critical to the rise of Christianity. “This is why I became a secular historian.” Formal church history is a myth, she argued, “Bishops being able to tell emperors what to do has really been the point of Christian history. But what were women and children doing?” The early Christian movement was not as courtly as Christian history might suggest, Cooper said, but rather something more like “an Arab spring: chaotic, prone to problems, messy; involving the inspiring, sometimes tragic, story of people with an inspired idea about how to change the world.” Within this movement, women emerge as leaders of households in communities around Jesus, and in communities welcoming Paul, long before the rise of the institutional church. “Women were driving the Church. What a surprise that is!” 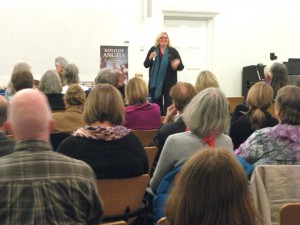 Good then invited Cooper to share insights from her sustained scholarly focus on women over several centuries of early Christian history. A New Testament scholar, Good was interested, for example, in Cooper’s understanding of the Mary and Martha story in Luke’s Gospel. The story can be read, Cooper explained, as an example of a first-century problem: whether a traveling teacher had to respect the authority of a householder. In the story, Martha welcomes Jesus into her home, and his rebuke is less about her practical ministry than, for Luke, an indication that, “actually, Jesus can speak to power,” Cooper said. Householders were important in the early Christian movement, yet they needed to wear their authority lightly. In the negotiation over whether householders could receive traveling teachers from among the followers of Jesus, “women were full players.”

Good also probed Cooper’s use of creative imagination in uncovering the contributions of early Christian women, including the “sound conjecture,” according to Good, that the Empress Pulcheria was instrumental in the development of the theology of Mary as Theotokos. Such use of creative imagination means that Band of Angels, Good said, “is not your ordinary academic book.” An audience member asked Cooper why she had begun her book with Chloe. “I had never heard of Chloe, and I found her fascinating.” The biblical figure of Chloe is mentioned only once, in 1 Corinthians 1:11, but clearly she is a householder. “Chloe is like an empty picture frame,” Cooper said. Discerning her story and contributions requires both scholarly knowledge of the early Church in Corinth and a willingness to use informed imagination.

In the book’s epilogue, Cooper places a young Mary at the Council of Chalcedon in 451 CE. “She is a shepherd’s daughter, barely of marriageable age but already expecting a baby…. Such a listener would make very little of the high-level talk about divine and human natures, and she would know nothing about bishops and their councils” (Band of Angels, p. 285). Yet she can help them, Cooper noted, as unnoticed women often did in the development of early Christianity. “Mary shows that anyone can do it,” Cooper told the gathering in Seabury Auditorium. “This thing of drawing down the power of heaven, try it.”