The General Theological Seminary invites you to Two Scholars Imagine The World of Early Christian Women, an evening with Kate Cooper, award-winning Professor of Ancient History at the University of Manchester, and Deirdre Good, GTS Academic Dean, on Monday, November 18, 2013. Together, they will offer a revisioning of Christian history to include the full weight of women’s contributions. Their scholarly conversation begins at 6:30 p.m. You are also welcome to come for Evensong at 5:30 p.m. and refreshments at 6:00 p.m.

To register for the evening, free and open to the public, click here.

By what ways, sources and methods do we see and trace the roles and influence of women in early Christian movements around Jesus?

Although women are marginalized and often invisible in recorded history, when they are given sustained scholarly focus over several centuries, as Kate Cooper does, women emerge as leaders of households in communities around Jesus, and in communities welcoming Paul, long before the emergence of the institutional church.

Deirdre Good is Professor of New Testament at The General Theological Seminary, specializing in the Synoptic Gospels, Christian Origins, Noncanonical writings and biblical languages (Greek and Coptic). While she is an American citizen, she grew up in Kenya where her parents were missionaries. She is a contributor to the blog, Episcopal Cafe and has written books on Matthew’s portrait of Jesus (Jesus the Meek King, 1999), on Mary traditions in Judaism, Christianity and Islam (Mariam, the Magdalen and the Mother, 2005), on households and family in the time of Jesus (Jesus’ Family Values, 2006) and Studying the New Testament, A Fortress Introduction with Bruce Chilton (2011).

Kate Cooper is Professor of Ancient History at the University of Manchester and the author of the new book Band of Angels: The Forgotten World of Early Christian Women, which follows the lives of women across the first centuries of the church. The book reveals how women from all walks of life, from peasants to empresses, played an invaluable role in Christianity’s growth. Their story, discovered by painstaking investigative scholarship, aided by informed imagination, witnesses to what invisible people can achieve.

Cooper says, “One of my motivations in writing the book was to put something into the hands of pastoral colleagues and educators that moves the question about early women away from ordination and into the realm of lived religion that is more directly useful to the majority of women, who are of course in the laity!”

This event will give you a glimpse of what happens in a seminary classroom. Come prepared! You can read Band of Angels ahead of the conversation and bring your questions. For example: How does Kate Cooper unearth women’s roles and influence? What difference does her scholarship make to our view of Christianity?

Or you can also purchase a copy Band of Angels that evening. A book signing will follow. 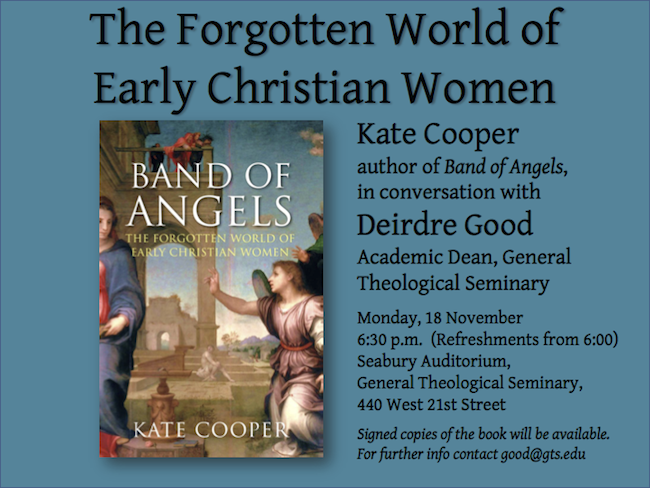