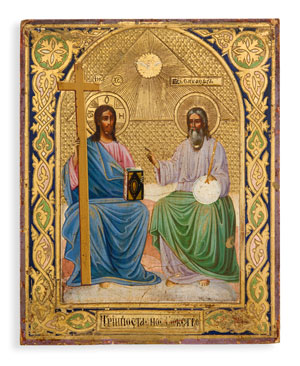 Religious Iconography of the 19th and 20th Centuries

January 28, 2014 (New York) – Opening on February 6, a special exhibition of religious iconography will be displayed at The General Theological Seminary. The exhibition is part of a celebration honoring the retirement and contributions of the Rev. Dr. J. Robert Wright, M.Div, D.Phil., D.D., D.Cn.L. to General Seminary, The Episcopal Church, and the Anglican Communion and His Beatitude Archbishop Nourhan Manougian, Armenian Patriarch of Jerusalem, who is receiving an Honorary Doctor of Divinity degree from GTS on February 6.

The exhibition consists of 22 icons and a number of smaller pieces selected from a private collection previously owned by Father J. Robert Wright. The religious icons and articles come from Russian, Greek, Serbian, Palestinian, and Ethiopian traditions, and the exhibition celebrates faith and tradition, artfully expressed in painting, textile and silver-work of the Orthodox churches.

Subjects range from the All-seeing Eye of God, patriarchs and prophets of the Hebrew Scriptures, to depictions of events recorded in the New Testament—saints and martyrs familiar and foreign to most Western Christians. The passage from Colossians, “Jesus is the image (icon) of the invisible God,” is the inspirational source of the iconographer who makes Jesus visible. Icons invite the beholder into the immediacy of intimacy with the Holy One. They are a medium through which the beholder and the one who is depicted may enter silently into a contemplative space. Icons connect us as a people of faith worshipping in different traditions to God, our common faith tradition. They help us to see God’s story in our story—and ours in God’s.

Preceding the opening of the exhibit on February 6, a Festive Evensong in the Chapel of the Good Shepherd will honor GTS Alumnus, His Beatitude Archbishop Nourhan Manougian, Armenian Patriarch of Jerusalem, and celebrate the conferral of an Honorary Doctor of Divinity degree upon him. A choir and musicians from St. Nersess Armenian Seminary will join our community during worship, adding aspects of the Armenian tradition to the Festive Evensong.

Members of the Press who wish to attend the exhibit opening on the evening of February 6 should contact Chad Rancourt, Director of Communications: rancourt@gts.edu