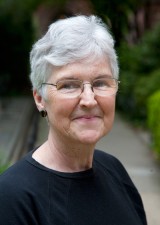 On January 24, 2014, Dr. Deirdre Good, Professor of New Testament at The General Theological Seminary, was invested as Honorary Canon of the Diocese of Central Pennsylvania and St. Stephen’s Cathedral, Harrisburg.

As reported by the Diocese of Pennsylvania:

“The service of Investiture was in the context of Solemn Choral Morning Prayer sung by MiContraFa, a choral ensemble from St. James, Lancaster, which is devoted to preserving the rich Anglican tradition of the sung prayer Offices (Matins, Morning Prayer, Evensong, Compline, and Vespers). An anthem and organ prelude was offered by the music ministry of St. Andrew’s, State College. The Venerable Canon Daniel Selvage was the preacher.”