This article first appeared in The Episcopal New Yorker, Summer 2014 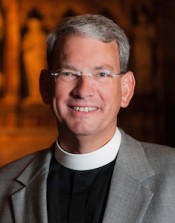 On Ascension Day in Inverness, Scotland, while on a recent family trip, I heard the Episcopal bishop of Moray, Ross and Caithness preach at a young lady’s confirmation. He recounted his own confirmation preparation as a youth, remembering his parish priest’s instructions on the purpose of altar candles. “They’re the ‘landing lights’ for the Holy Spirit,” he remembered from his classes. Naturally, the congregation laughed; oddly, he didn’t.

It made me think about what happens at church, and how we prepare the flock for ministry—but more, how we prepare it for vocation. Sure, I heard his sermon, which used his recollection as a jumping off point for a talk about mission and ministry as they relate to a new confirmand. But I couldn’t help wondering about those “landing lights,” and how they guide us in vocation.

When I was a parish priest, the first thing people thought about when they felt God’s call on their lives was to leave their current profession and become a priest. I would listen and poke and prod, ultimately asking about their baptism. My approach always ended with an analogy of a pizza pie.

“In baptism,” I would say, “you receive the whole pizza pie of ministry in the church with a little, teeny, tiny slice removed: absolving sin, blessing things and people, and consecrating bread and wine at the Eucharist. Everything else is fully available to you in baptism.” My parting assignment was always the same: pray about how you need that little, teeny, tiny slice to fully live into God’s call to you.

Most—but not all—never pursued ordination. All it took was a prod to open their eyes to the fullness which God calls forth in all of us. It really is applicable for all types of vocations: true, life-giving, world-enhancing vocations. Like being an investment banker; or a magazine reporter; or a kindergarten aide: You know, the kind of vocations which God calls us to. Seriously.

How would God run an investment bank? He would want to, by the way! Have you ever seen an economy without access to capital? It’s utterly crushing. The Christian question, therefore, is not whether to have investment banks and bankers, but rather how they act. Don’t we want the baptized involved in those decisions?

How would the Church staff and run newspapers and magazines? Not just churchy ones, but the financial press—or yachting magazines? Would we design them to enable people, and to promote justice in all quarters? Would life be richer and fuller if publishing was led by the baptized? How would Jesus be as a kindergarten aide? Well, you get the point.

I’m still making that same inquiry, but now with a different audience: an entire institution designed to educate and train priests. For 197 years, right in the heart of the Diocese of New York, General Seminary has been The Episcopal Church’s primary training spot for Episcopal priests and bishops. But General, along with all seminaries in North America affiliated with any mainline denomination, has seen a decrease in the numbers of priests we are called to train. Yet our mission remains strong because we are not exclusively focused on that very narrow slice of the pizza pie.

General Seminary serves the baptized in all of their vocations. Would that investment banker be a better banker with a course or two on theology under her belt? Would writers, editors and publishers be better writers, editors and publishers in this Kingdom on Earth if they had a deeper appreciation of the Psalms and the Gospels? How would that kindergarten aide eat from the buffet of a little liturgical training and use it to enhance play time for his students?

None of these vocational enhancements needs to end in a degree. But they all end with a better world. The usual suspects for seminary education are not the “usual suspects” any more. General students don’t necessarily come with a white collar in their future. Theological education, whether with an intentional degree in mind or just a class or two, is for everyone. It’s for the Kingdom.

Now, about those “landing lights”…

Vocations serving Christ in the world, whether as ordained clergy or as the banker, writer, or kindergarten aide, are all enhanced by theological thinking, education, and training. There is no question that a better prepared Body will change lives. But those same vocations, exercised within the larger group of individuals called the Church—that place where the Holy Spirit works most powerfully—can change the world.

During that good Scottish Ascension Day sermon, I was so intrigued by the “landing lights” analogy that my mind wandered. I wonder—what if those lights really defined a take-off zone? I suspect, in fact, that this vocational stuff is all about engaging the landing…and preparing for the take-off.