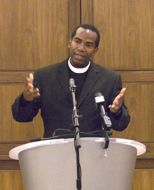 The General Theological Seminary has announced that the Rev. Michael Battle, Ph.D., has been appointed as the Herbert Thompson Professor of Church and Society. He will also assume the position of Director of The Desmond Tutu Center. As its new Director, Battle holds a unique connection to The Desmond Tutu Center, having lived in residence with Archbishop Desmond Tutu in South Africa for two years (1993-1994) and being ordained a priest in South Africa by Archbishop Tutu in 1993. He also presented the 2008 Paddock Lectures in the Tutu Center at General Seminary on Ubuntu, an African concept central to Archbishop Tutu’s world-view.

Most recently, Battle served as Interim Dean of Students and Community Life at the Episcopal Divinity School. He has served as Vicar or Rector at: St. Titus Episcopal Church, Durham, North Carolina; Church of Our Saviour, San Gabriel, California; and St. Ambrose Episcopal Church, Raleigh, North Carolina. He also served as the interim rector or as an associate priest with other churches in North Carolina and in Cape Town, South Africa. Among his placements, he worked at churches located in ethnically changing neighborhoods to help them adapt and grow. Battle has also served as Provost and Canon Theologian for the Episcopal Diocese of Los Angeles. In 2010, he was installed as “Six Preacher” by the Archbishop of Canterbury, Rowan Williams.This is one of the highest Anglican Church distinctions, going back to 16th century England and Thomas Cranmer, and is only given to a few who demonstrate great insight into the Church.

As part of his many roles in the Church, Battle has served as chaplain to: Archbishop Tutu, Congressman John Lewis, the House of Bishops, and, in 2008, he was chaplain to the Lambeth Conference of Anglican Bishops. He is a featured keynote speaker and has led numerous clergy and lay retreats, including the bishops’ retreat of the Province of the West Indies. In addition, Battle has served as vice president of the Institute for Nonviolence.

Battle has kept close ties with Archbishop Desmond Tutu and has written about his studies and friendship with the archbishop in his books. Battle and his wife, Raquel, were married by Archbishop Tutu; and their two daughters, Sage and Bliss, and son, Zion, were all baptized by him as well.

The Rev. Dr. Robert J. Owens, Professor of Old Testament, says Battle “will bring to General Seminary an impressive combination of theological scholarship, pastoral ministry, international and cross-cultural service in the Anglican communion, as well as his striking success as a teacher in some of the Episcopal Church’s leading seminaries. I think our students will be greatly blessed as they encounter his theological mind, his pastor’s heart, and his hopefulness for the church as a community of justice.”

Battle will begin his new position at General Seminary in fall 2015 and will teach Ethics and will lead the Graduate Anglican Seminar, as well as intensive courses that will be offered, for credit or audit, through The Desmond Tutu Center.