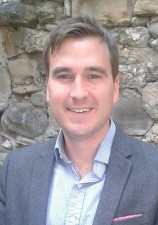 The General Theological Seminary has announced that the Rev. Dr. Todd H. W. Brewer has been named Assistant Professor of New Testament beginning fall 2015. Brewer already has ties with General Seminary, having taught an introductory New Testament course for diaconal candidates this past spring.

Most recently, Brewer served as Associate Rector of St. Peter’s Episcopal Church, Morristown, New Jersey. He holds an M.Div. from Trinity Episcopal School for Ministry, Ambridge, Pennsylvania, and an M.A. in Biblical Studies from Durham University, Durham, England. He received his Ph.D. in New Testament also from Durham University. In addition to teaching New Testament at General, Brewer was a lecturer at Lindisfarne Regional Partnership, a seminary in the Church of England. He has presented several conference papers, including one in the Historical Jesus section of the Annual Meeting of the Society of Biblical Literature (November 2014) and is a member of the Society of Biblical Literature and the British New Testament Society.

In the fall, Brewer will teach the foundational course, “Introduction to the New Testament,” an elective course titled “Paul: The Radical Jew,” and “Introductory Biblical Greek.” He will also offer a reading course in Advanced Coptic.