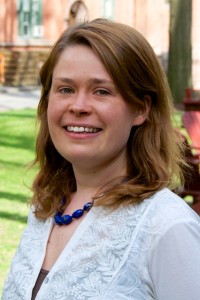 During the Commencement ceremonies at The General Theological Seminary on May 11, 2016, Elizabeth Brooke Schrader, M.A. ’15, S.T.M. ’16, was awarded the Clement J. Whipple Prize for a paper submitted by a student accepted for publication. She received the prize for her article, “Was Martha of Bethany Added to the Fourth Gospel in the Second Century?” which is forthcoming in the Harvard Theological Review in early 2017. An online preview will be available in July 2016.

The paper examines scribal activity in over one hundred manuscripts of the Gospel story where Lazarus is raised from the dead, John 11-12. In the oldest existing manuscript of the Fourth Gospel (Papyrus 66, ca. 200 C.E.), as well as several other important manuscripts, there is textual instability around the figure of Martha of Bethany. In fact, Martha’s presence in the text is unstable throughout the entire manuscript transmission of the Fourth Gospel. Therefore, this paper suggests that Martha may have been added to the Gospel of John by scribes at a very early stage of the text transmission—and Martha’s absence may provide us with new information about the identity of Mary Magdalene in the Gospel.

Schrader has accepted admission to the Ph.D. program at Boston University’s School of Theology.