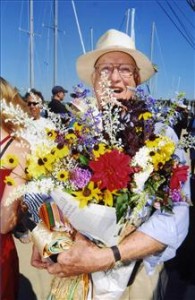 The Rev. James B. Jeffrey (Class of 1958), a dear and faithful son of General and servant of the Church, died on July 7, 2013. His financial support, both to the Annual Fund and Chelsea Square Development Campaigns, was unwavering.

We learned after his death that Jeffrey had remembered the Seminary with a very generous Legacy Gift, and we want to take this moment to remember him with our deep gratitude and uplifted prayers. His gift matters. It is not only a healthy boost to our ongoing efforts to grow our endowment; it reinforces our resolve to educate and form the leaders who will grow the Church that Jim Jeffrey served with steadfast faith and devotion.

Jeffrey’s dedication and stewardship went far beyond the financial. His pastoral care and the leadership he provided to alumni who followed him was near legendary. Peggy Muncie, Class of 1974 and current member of the Board of Trustees, remembers him as “one of the fathers of CPE and health care chaplaincy in New York,” where he was a CPE Supervisor at the birth of Midtown Chaplaincy. Muncie, one of General Semianry’s  first female graduates, noted that Jeffrey was a great supporter of her interest in chaplaincy, “showing wonderful encouragement at a time when it was difficult to support a woman.”

After graduating from General, Jeffrey served the Church of the Incarnation in New York City for four years and then became Rector of St. Luke’s Episcopal Church in Eastchester, New York, until 1966. After being awarded a Fellowship by the Episcopal Mission Society of the Diocese of New York in Clinical Pastoral Education, he moved into institutional chaplaincy at both hospitals and prison ministries.

As the Chaplain and CPE Supervisor at St. Luke’s-Roosevelt Hospital, he established their AIDS Ministry and continued to care for those with AIDS until retirement in 1995. Jim Jeffrey spent his entire ministry in the Diocese of New York and the Eastern Region of the Association for Clinical Pastoral Education (ACPE). He served the Diocese as the Dean of Institutional Clergy and for the Committee on Alcoholism and Addictions. Within the ACPE, he served on the Certification Committee and chaired the Accreditation Committee. He helped found the Gay and Lesbian Task Force and was elected the Regional Director of the Eastern Region ACPE.

Jeffrey’s true passion was gardening and horticulture. He was renowned for his success in acclimatizing camellias to the environment of his East Hampton home. He was Honorary Vice President of the Delphinium Society, President of the Horticultural Alliance of the Hamptons, bringing horticultural education to local schools, the elderly, and the disabled.

Muncie also remembers a “caring individual and good educator who was challenging, kind, and compassionate.”  Jeffrey was encouraging of ministry in whatever form it might take. We give thanks that his journey of joy, faith, knowledge, and devotion to General and the Episcopal Church led him to leave a lasting legacy in support of theological education. Working through benefactors like Jim Jeffrey, the Holy Spirit ensures that faithful witness and mission not only continue, but grow.