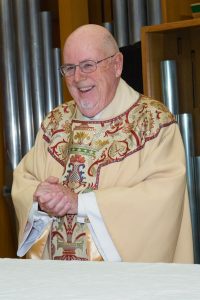 The chapel at St. Hilda’s & St. Hugh’s School in Manhattan has been renamed in honor of General Seminary Alumnus, the Rev. Canon Jay. H. Gordon (Class of 1962). Gordon served on the Board of Trustees of St. Hilda’s and St. Hugh’s for more nearly 30 years and acted as the Chair of the Board from 1989 until his retirement from the Board in the spring of 2016. On June 3, 2016, a Eucharist with sermon by the Rt. Rev. Allen K. Shin, Bishop Suffragan of the Diocese of New York, and retirement celebration were held, and the chapel was officially named “Gordon Chapel.”

Gordon’s tenure on the Board was marked by his leadership in guiding the school out of a financial crisis to a place of strength, both fiscally and spiritually. As part of this revitalization, Gordon oversaw the implementation of the Master Building Plan, which raised more than $32 million to completely renovate the school buildings. Additionally, he helped rebuild the school’s endowment to $8.8 million. 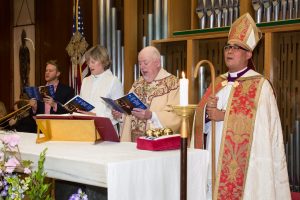 “Canon Gordon has been a true steward of the school’s mission, and of the vision of our founder, the Reverend Mother Ruth. His commitment to the life of St. Hilda’s & St. Hugh’s—in body, mind, and spirit—has revitalized the school and its community in his nearly 30 years of service,” says Head of School, Virginia Connor in a statement about Gordon’s retirement.