The General Theological Seminary is pleased to announce the next recipients of its Doctor of Divinity degree, honoris causa, to be conferred at the 195th Commencement ceremonies on Wednesday May 17, 2017. “Honorary doctorates of divinity (DD) include individuals who are called into the special ministry of leadership within the episcopacy, priestly service, and laity alike,” said The Very Rev. Kurt H. Dunkle, Dean and President. “The DD recognizes the special charism of study, teaching and ecclesial leadership unique to a church leader. This distinction is not an emolument, but recognition of the integral part of the formational role General Seminary had in each of these recipients’ preparation and furtherance for their unique ministries. The honorary degree also highlights the fundamental role of ministerial formation; each of the recipients’ relationship with General Seminary prepared or furthered their unique ministry,” said the Dean and President.

The four recipients of the honorary Doctor of Divinity are: the Rev. Barbara Cawthorne Crafton, the Rt. Rev. Griselda Delgado Del Carpio, the Rt. Rev. Dr. DeDe Duncan-Probe, and Herb Thomas, unanimously elected at the February 2017 Board of Trustees Meeting. Crafton is honorary associate rector of St. Luke’s Episcopal Church in Metuchen, NJ. She was rector of St. Clement’s Church in Manhattan’s Theatre District. She was also a chaplain for the Seamen’s Church Institute of New York, and served historic Trinity Church, Wall Street and St. John’s Church in Greenwich Village. She was a chaplain at ground zero during the recovery effort, following the terrorist attacks at the World Trade Center on September 11, 2001.

An actress, director and producer, she has worked for many years in combining the lively arts and the life of faith. Her books, articles, and radio scripts have won many awards, including numerous Polly Bond Awards from Episcopal Communicators and the coveted Gabriel Award for religious broadcasting. She is seen frequently on television both as a preacher and as a commentator on Hallmark’s “New Morning” and “American at Worship,” and has been profiled extensively in electronic and print media throughout the world. She is a prolific and highly respected author. Her most recent books are The Also Life (2016) and Called (2017).

Barbara Crafton is married to Richard Quaintance, sometimes better known simply as “Q”, a professor of English literature. She has two children and two grandchildren.

Crafton commented: “I love students. I love walking with them as they prepare for the vocation for which I prepared in this place so long ago, and I have loved the ongoing relationships I have had with many of them, years after their graduations. As long as there are students here and for as long as I am able, I will count it my joy to support them in any way I can.” 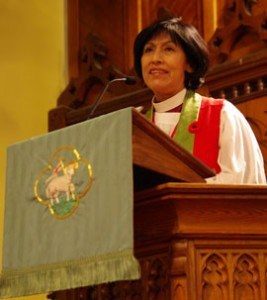 The Rt. Rev. Griselda Delgado Del Carpio is the diocesan bishop for the Diocese of Cuba, the first woman to hold this office. She attended the Universidad Mayor de San Andres in La Paz, graduating in 1981 with a degree in sociology. In 1982, she moved to Cuba to enter the Evangelical Seminary of Theology in Matanzas, Cuba.

She was ordained in Cuba as a deacon in 1986. Shortly thereafter, she arrived at Itabo, Cuba to serve at Santa Maria Virgen. Working from a small house across the street, Deacon Griselda began introducing the townspeople to the love and hope of Christ. In 1991 Bishop Emilio Hernandez ordained Deacon Griselda as an Episcopal priest with two other women, the first three women priests of the Episcopal Church of Cuba. She continued at Santa Maria Virgen as Rectora for the next 20 years, inspiring the congregation of Santa Maria Virgen to work together to restore their town church back proud and strong, to build a self-sustaining community system of agro-ecological farms on and around the church, and to build their relationships with each other and with God.

On February 7, 2010, The Rt. Rev. Griselda Delgado Del Carpio was consecrated as bishop coadjutor for the Diocese of Cuba and was installed later that year on November 28 as diocesan bishop of the Episcopal Church of Cuba at Holy Trinity Cathedral in Havana. She became the first woman to serve in that role as diocesan bishop of Cuba.

At the time of her consecration as bishop, the Cuban church included about 40 congregations and some 6,000 Episcopalians. “La Obispa,” as she is affectionately known, is the proud mother of three grown children: Griselda Edith, Lautaro, and Marcela Beatriz. She is married to Gerardo Logildes Coroas who was recently ordained as an Episcopal priest. 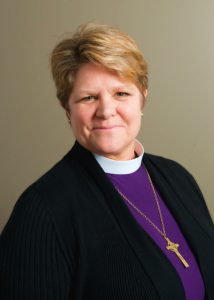 She was consecrated as the 11th Bishop of Central New York on December 3, 2016, following her election to the position at a special convention of the Diocese of Central New York on August 6, 2016. She enjoys building up sustainable ministry, encouraging people in their service of God, and sharing the vibrant love of Jesus by organizing and implementing healthy church systems.

Prior to entering ordained ministry, Duncan-Probe had a successful career in education and business. She began her professional life as an educator, teaching in public and private schools, including 2 years working with inner-city at-risk youth in Los Angeles, California. During her time in California, she also enjoyed a career as a professional singer, performing gospel, blues and jazz music with a variety of groups.

She and her husband, Chris Probe, have three children. Bishop Duncan-Probe enjoys golfing, hiking, visiting art galleries, kayaking, tennis, and spending time with her family and their two dogs.

Duncan-Probe commented: “As a graduate of The General Theological Seminary I remember my time there fondly, and I am grateful to the institution for this honor. I look forward to the privilege of spending time with this year’s graduates, the leaders and scholars who have helped to form them, and my fellow honorees.” Mr. Herb Thomas is a lay leader in the Episcopal Church. He served in various administrative positions at The General Theological Seminary for 35 years. Following his retirement, he became an honorary alumnus of General. He was also the inaugural recipient of the Clement Clark Moore Award.

Before his work at General, Herb served in the Army; he also worked as an assistant personnel manager at a financial institution.

He joined staff at General in 1958 as the Secretary for Alumni Affairs. His tenure at General included service under three different deans in various positions, and on numerous committees. His career at General culminated in becoming Vice President of Operations. He retired from this position in 1993 after 35 years of service. While at General, Thomas created the alumni relations department. Additionally, he also spearheaded the first annual fund. He also inspired collaboration by working with other seminaries to encourage tied giving from parishes. He also innovated the placement process, which assisted students in determining their first call.

Thomas is a lifelong Episcopalian; he was baptized at Grace Church Newark, NJ and has always been a member of the Diocese of NJ moving to Trinity Church in Moorestown, NJ in 1995. He has served in many lay roles for both the diocese and his parish. He was a member of the Board of Youth Consultation Services for the Diocese of Newark and served his parish on the vestry and as a warden. He has been married for 60 years and has one daughter and one granddaughter.

Thomas describes his work at General “as a labor of love.”