Leading up to the Fall semester, the Rev. Canon Stephanie Spellers, Adjunct Professor, has taken on expanded roles at The General Theological Seminary. Her new position includes key responsibilities in implementing the Seminary’s new initiative, The Way of Wisdom. 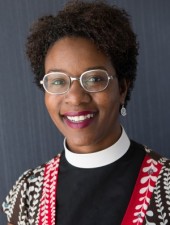 Spellers will continue in her appointment as Adjunct Professor of Church and Society and takes on the additional role of Director of Mission and Reconciliation. She will teach courses and lead other offerings that relate to mission, evangelism, and reconciliation in the field of ministry, and will begin the work of expanding our offerings to the increasingly important outside community. In her undertakings she will highlight the role of mission in our education and formation of students for all types of leadership. As part of her new responsibilities, she is joining The Way of Wisdom planning team and will be offering mentor-training and resources to Wisdom Year residency sites. Spellers will continue to serve part-time as Canon for Missional Vitality in the Diocese of Long Island and as a Senior Consultant in the Center for Progressive Renewal, an ecumenical center for church development and renewal.

Spellers is a popular speaker and is the author of numerous books, including The Episcopal Way (2014), Ancient Faith, Future Mission: Fresh Expressions in the Sacramental Traditions (2010), and Radical Welcome: Embracing God, The Other and the Transforming Power of the Spirit (2006). She serves as one of two Chaplains to the House of Bishops and recently chaired the Episcopal Standing Commission on Mission and Evangelism. Along with Eric Law, she is the co-editor for the new Church’s Teachings for a Changing World series.

From 2005 to 2012, Canon Spellers served as founding priest for The Crossing, an emergent congregation based at St. Paul’s Cathedral in Boston. She earned an M.A. in 1996 from Harvard Divinity School and an M.Div. from Episcopal Divinity School in 2004. Prior to and concurrent with priestly ministry, she served in the administration at Harvard Divinity and worked as a religion reporter for a regional daily newspaper and as an editor for Episcopal Church Publishing.

The Way of Wisdom

Through partnerships with churches, dioceses, and other ministry locations in the metropolitan area, third-year seminarians at General will get real jobs at real parishes and other ministry settings. These part-time positions will be their first job using their seminary formation, and students will learn first-hand while being the pastor, preacher, and decision-maker.

To read more about The Way of Wisdom, including Dean Kurt H. Dunkle’s articles, “Diving into the Deep End” and “The Wisdom of Both/And,” go to www.gts.edu/wisdom.