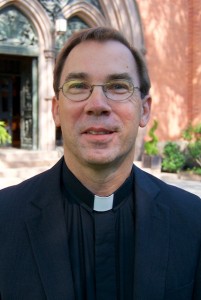 The Rev. Kevin Moroney, Ph.D. joins General Seminary this semester as an Affiliated Professor of Liturgics. GTS News recently sat down with him to talk about his background and the perspective he brings as an alumnus.

I’ve been serving as Rector of Christ Church Ithan, in Villanova, Pennsylvania, for the last six years. I grew up in northern New Jersey. My father commuted into the city, so I’m very familiar with coming in and out of New York for parades and sporting events. I am also a graduate of General Seminary, Class of 1992. As a matter of fact, my first liturgy class here was 25 years ago this semester. So, for me, this feels like a silver anniversary edition of the course.

After graduating from General I returned to the Diocese of New Jersey, and began serving in a bi-vocational ministry from the outset. I have served as curate and rector; but for as long as I’ve been ordained, I have always been called to an academic ministry as well. In my early years that was comprised of parish ministry with degree work. After I completed my degree, I was in full-time academic ministry for some years. When I returned to parish ministry, I always also taught at the seminary level. This bi-vocational aspect has always been part of what I do.

While at General, Prof. Robert J. Wright noticed my interest in Irish Anglicanism, and at the celebration party after our CPE summer, he suggested that I consider doing field placement in the Church of Ireland. He arranged for that to happen and I spent three months at Christ Church Cathedral, Dublin, and in the rural west of Ireland, where my own family is from. In 2000, I moved there to take a position at the Church of Ireland Theological College. I began as a chaplain tutor, and almost immediately began expressing an interest in how their liturgy program could be integrated into the life of the chapel. This led to becoming a liturgy lecturer, and the college gave me time and funding for my Ph.D. in Liturgy. My doctorate was an assessment of the full revision of the Irish Prayer Book happening at that time. And that was the launch of my vocation as a liturgics instructor.

When I came home from Ireland in 2005, I had a few loose ends to finish with my dissertation and used the library at the Lutheran Theological Seminary in Philadelphia for my research. Through that relationship, I was asked to begin teaching some courses, as the need arose. There, I teach liturgy, biblical studies, and Anglican studies.

Also in 2005, I met my wife, Rosemary, at my first parish placement back here in the U.S. We married the next year, and we now have what I like to call two lovely acolytes, Elsa and Maggie, who are eight and six years old. As I have settled down into my marriage, family, and academic lives, my ministry has continued to progress along the same bi-vocation path. I pastor a lot and I teach a lot.

You mention that you graduated from General Seminary. What do you remember about your experience here?

I arrived at General in the fall of 1989 and this was where I first experienced my passion for study of liturgy and equally my passion for biblical studies. General Seminary prepared me for the ministry I have encountered ever since, both as a pastor and as an academic. Here, the seeds were planted for the bi-vocational ministry I have always had.

What are you excited about teaching this semester?

When it comes to teaching liturgics, I am driven by two primary concerns. First of all, I am passionately committed to the Anglican formation pattern of the prayers speaking to the classroom and the classroom speaking to the prayers. That is a unique tradition of Anglican formation that I believe in strongly and is supported here at General. I couldn’t be happier that on a Monday morning, we spend an hour and a half in class, then we go to Chapel, and then we go back to class.

Secondly, I’m concerned for the well-being and formation of the students. People who come to seminary usually are making incredible sacrifices in order to do so. They are taking time away from their personal lives and families. I will do anything I can to make the formation process more enjoyable, more human, and to provide the friendship, companionship, and witness of somebody who has experienced this for a long time, in order to encourage them along the way.

Beyond teaching, in what ways do you see yourself participating in the daily life of General?

I am truly excited about my involvement in chapel life. Dean Dunkle brought to me the idea of a practicum that would provide the structure and content of Monday morning chapel. A few conversations later, we had come up with what is actually quite a good plan. On Monday afternoons, I meet with students for an hour. We call it “Preparing the Feast.” During this time, we review the Collect and Readings for the day, and we discern what themes are commingling to create the liturgy.

We then pick the music, prayers, and what we call the “Little Propers,” the best Offertory sentence, the best collect for the conclusion of the Prayers of the People, and so forth. Liturgy is where the church tells its story; what we are doing is pulling a thread through that story, so it is very cleanly proclaimed. That planning becomes the service for Monday morning chapel the next week. We then lead the service the next Monday and reconvene that afternoon to discuss how it went and to plan the following week.

This is the integration of theory and practice. It is not simply about picking our favorite hymns or using the same Offertory sentence each week; it is about thinking more intentionally about how the church tells its story, and the ways we can do it in ever-increasing, thematically consistent ways.

I will also hold office hours on Monday afternoon and, because mentoring is an important part of priestly formation, each liturgy student will actually have a scheduled one-hour sit-down chat with me during the course of the semester. I will also share meals in the Refectory and participate in Evensong.

General Seminary was my mother in ministry. I came here with a deep faith and a sense of call. General stretched me in the ways I needed to be stretched, and deepened and enriched me in areas that mean the world to me. When I came here in July with my family, the first thing I did was to take my children into the chapel. There I showed them where Daddy sat for three years, and I just spent time in the chapel with my little girls. Why? Because I am their source and that chapel was my source.

I love the worship in that chapel and it formed me for three years when I was here. It sustained me during the difficult times—we all have difficult times in seminary. The General Seminary prepared me for a life of ministry in The Episcopal Church, and in the Anglican Communion. When I left here to be the curate of St. Luke’s in Metuchen, New Jersey, I knew what to do. I knew how to be. I knew how to pray. I knew how to deal with stress and difficulties. And that was because I spent three years at General undergoing an intense formation process that widened, tested, poked and prodded, and deepened.

What do you see as the future of General Seminary?