Professors Michael Battle and Todd Brewer of The General Theological Seminary will deliver this year’s prestigious Paddock Lectures on Wednesday, November 4 and Thursday, November 5 at 2:00 p.m. The lectures are a feature of the annual Alumni Gathering. If you are a member of the GTS Alumni community, please click here for more information about registering for the Gathering, which includes the Paddock lectures.

Click here to purchase tickets for the general public.

The lectures will provide both theological and practical conversation for why Christians engage upheaval as a necessary good. More specifically, Paul’s experiences of upheaval positively generate his pluralistic vision of the Church. And an apocalyptic vision, spawned by John of Patmos, provides a way for communities in the 21st century to navigate their way through nightmares to beatific vision. Battle is General’s recently appointed Herbert Thompson Professor of Church and Society, as well as Director of The Desmond Tutu Center. He was ordained a priest in South Africa by Archbishop Tutu in 1993, and lived in residence there for two years. He has served at many Episcopal schools, most recently as Dean of Students and Community Life at the Episcopal Divinity School. Among his many placements he has served in Durham and Raleigh, North Carolina, San Gabriel, California, and in Cape Town, South Africa. Battle has also served at churches located in ethnically changing neighborhoods to help them adapt and grow, as well as Provost and Canon Theologian for the Episcopal Diocese of Los Angeles. He has published nine books. To read more about Professor Battle, click here. 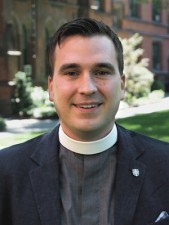 Brewer is General’s newly appointed Assistant Professor of New Testament. He was a lecturer at Lindisfarne Regional Training Partnership, a seminary in the Church of England. He has presented several conference papers, including one in the Historical Jesus section of the Annual Meeting of the Society of Biblical Literature (November 2014) and is a member of the Society of Biblical Literature and the British New Testament Society. To read more about Professor Brewer, click here.

The Paddock Lectures were founded in 1880 by General Seminary benefactor George A. Jarvis and named in honor of the Rt. Rev. Benjamin Henry Paddock, Class of 1852. The Lectures have brought to General’s campus a remarkable group of Anglican scholars, from William Temple to Sarah Coakley, and have become a prestigious and highly anticipated feature of General’s annual Alumni Gathering. If you are a member of the GTS Alumni community, please click here for more information about registering for the Gathering, which includes the Paddock lectures.