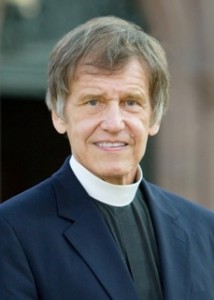 A false, and deadly, dichotomy persists in discussions of seminaries: a seminary, so this notion suggests, must either emphasize liturgical niceties or stress the urgencies of the social Gospel. Similarly, a dichotomy exists where a seminary must choose between clerical preparation and the education of the laity.

At The General Theological Seminary, we have been creatively exploring and developing an innovative, groundbreaking approach to Christian and priestly formation for the 21st century. Therefore, some have concluded, we must be sacrificing our traditional academic integrity. We must be morphing into a “trade school.”

Those who have come to that empty conclusion—especially those who broadcast it through the twin, unreliable channels of social media and the rumor mill—need to consider two realities: General’s present academic output and our vision of integration.

Let’s look at the truth about our current academic activities.

Michael Battle, Professor of Church and Society, is completing Revelation: a Commentary for Today for John Knox Press (Autumn 2016) and South African Confessor: A Spiritual Biography of Archbishop Desmond Tutu (2017).

Todd Brewer, Assistant Professor of New Testament, is scheduled to give a paper, “One Greater than the Temple is Here: Comparing Matthew, Judas, and Philip on Jesus’ Sacrificial Identity,” at the Connecting Gospels Colloquium at Durham University in England this July.

I myself am working on a translation and study of a primary text by Nilus of Ancyra for the St. Vladimir’s Press, a chapter of which will be my paper at the 2016 International Conference on Medieval Studies in Kalamazoo, Michigan, and I’m also working on Carolingian Polymath: an Introduction to Rabanus Maurus, tentatively for the Dumbarton Oaks medieval series at Harvard University Press.

All of us are either planning, or have already completed, pilgrimages with students to Africa, Israel, and Southern France. And all are currently offering academically challenging courses, such as Atonement; Eastern Religions; The Trinity; Paul: a Radical Jew, in addition to our core curriculum classes.

Our Affiliate Professors are just as seriously productive: Kevin Moroney’s article, “And The Episcopal Church Shall Revise (Maybe),” will be featured this spring in the Inter-Anglican Journal, published by the Church of Ireland, and Shane Scott-Hamblen is polishing his doctoral thesis for publication.

The indefatigable Alina Feld, Affiliate Professor of Theology, has in the past year alone published five papers, including “God, Freedom, and Immortality in the Digital Age: Baudrillard’s Perfect Crime” for the Ecumenical Theological and Interdisciplinary Symposium in New York City in December 2015, and also  “A Response on Carl Theodor Dreyer’s The Passion of Joan of Arc” for the American Philosophical Association Eastern Division in Washington D.C. this past January, while finishing her second book, The Bodies will be Judged: A Hermeneutic of the Resurrection from Gregory of Nyssa to Michel Henry, Alain Badiou, David G. Leahy.

More importantly still, our students and seminarians are equally prolific in academics. Tommie Watkins, a senior and former community council president, is writing his M.Div. thesis on the critical relationship between the Twelve-Step program in various substance-abuse support systems and the classic Christian ascetical principle of kenosis or “self-emptying,” which originated in the hymn in Philippians 2.

S.T.M. candidate Libbie Schrader is working on a compelling study of the names and numbers of women in the Gospels present in the crucifixion, entombment, and empty tomb narratives, arguing that the data demonstrate that the names and numbers of women significantly differ, not just from Gospel to Gospel, but from manuscript to manuscript within each Gospel.  Her master’s thesis, which suggests that Martha is a scribal interpolation into the Fourth Gospel, is forthcoming in the Harvard Theological Review.

Co-chief Sacristan Matt Jacobson, who was a pediatrician in his “former life,” has excelled in Greek, having won the 2015 McVicker Prize in that language. He has been studying advanced Greek in two classes this year, and is studying Latin on his own.

These are in no way atypical; I could mention the academic achievements of virtually any General Seminary student.

General Seminary has not compromised in the area of scholarship. We have not become a “trade school.” Our minds are active; so is our richly endowed Keller Library. But, neither are we an ivory tower with a chapel attached. We are The General Theological Seminary, and we aim to be worthy of all three elements of our name.

Our institutional vocation is formation: of Christian leaders who are both well-equipped and well-informed. We take academics, Chapel, and practical field experience with equal—and very great—seriousness.

That brings us to our vision of integration. As Dean Dunkle has often stressed, with us the truth is not “either/or,” it is “both/and.” We believe that our bold innovations in formation do not detract from our academic excellence. On the contrary, we believe the two are complementary; just as we believe that a healthy spiritual life, centered in our Chapel of the Good Shepherd, supports both.

Expressed in Gospel terms, we are pouring our new wine into new wineskins. And we believe the new vintage is lively and good.