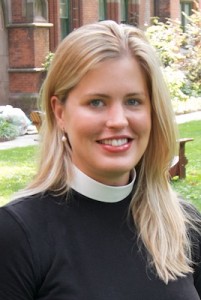 The General Theological Seminary is pleased to announce the appointment of the Rev. Emily Wachner to the faculty as a full-time Lecturer in Pastoral Theology. Wachner will also continue as the Director of Integrative Programs, a role she has held for the past year. In this capacity, Wachner has expanded and strengthened the Wisdom Year program, placing twelve students in Wisdom Year sites for the 2016-2017 academic year. Wachner has assumed the teaching duties of the Rev. Stephanie Spellers, who has taken the position of Canon to the Presiding Bishop for Evangelism and Reconciliation. In the fall of 2016, Wachner will teach or co-teach four courses, including the expanded integrated seminar sequence, in addition to the Liturgics Practicum, which she will co-teach with Prof. Kevin Moroney.

Wachner came to General Seminary after spending four years on staff at Trinity Church Wall Street, where she planted a new congregation intended primarily for families with young children at St. Paul’s Chapel, after leading in a long-term, cross-departmental strategic planning process. This congregation, launched in September of 2014, quickly grew to a booming group of nearly 200 worshippers, revitalizing a space which previously had welcomed an average of 40 worshippers per Sunday. While on staff at Trinity, Wachner completed three years of adaptive leadership study through the Clergy Leadership Project. She will bring this, and her seven years of congregational experience, to bear in the classroom and in contextual sites throughout in the New York City area.