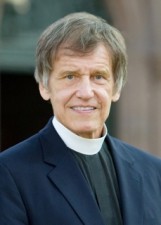 On December 9, 2016, the Rev. Dr. Clair McPherson, Professor of Christian Theology at The General Theological Seminary, delivered the first keynote address at the Ninth Annual Sophia Institute Conference, one of the world’s great Patristic and Orthodox gatherings. Sophia Institute President, the Very Rev. John McGuckin, introduced McPherson as “one of our most eminent Patristic scholars, and the world’s leading expert on Nilus of Ancyra.”

Nilus was in fact McPherson’s subject; he spoke for almost an hour on the results of his research into and translations of this neglected fifth-century Greek theologian. He described how Nilus is a major Christian writer for several reasons: he is the link between the great Nicene theologians of the fourth century and the later Byzantine tradition; he offers us a window into the life of the Church and city in the fifth century; and his striking style makes him interesting to believers and nonbelievers alike. McPherson’s talk was also a brief foretaste of his forthcoming book on Nilus, Nilus of Ancyra: a Link in the Chain, which will contain translations of almost everything Nilus wrote, plus a book-length introduction and interpretation.

V.K. McCarty, Class of 2011, who presented at the conference her own paper titled, “Kindling Divine Fire: The Ascetical Teaching of St. Syncletica,” says McPherson’s presentation contained “even more exciting Nilus material than we’ve ever heard before.”