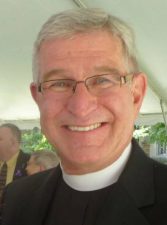 The Rev. Dr. Stuart Hoke (S.T.M. ’96, Th.D. ’00, and Adjunct Professor of Pastoral and Ascetical Theology) was honored with the Samuel Shoemaker Award at the annual meeting of Recovery Ministries of the Episcopal Church (RMEC).

For the past 12 years, Hoke has pioneered the teaching of two recovery-related courses at General. The Very Rev. Ward B. Ewing, D.D., Class of 1967, was Dean and President when those classes were introduced. “When we began the course, General was the only seminary in the Association of Theological Schools to have a course on addiction,” he said. “The class has always received the highest evaluation from the students who recognize the importance of understanding addiction in their pastoral ministries.”

“Stuart has educated a generation of clergy to recognize and respond appropriately to the cunning, baffling, and powerful disease of addiction. His work has had a significant impact on the health and vitality of our church,” said Ewing, now retired from General Seminary and currently serving as non-alcoholic trustee of the General Service Board of Alcoholics Anonymous and past chair of the board. “I cannot imagine a more appropriate recipient for this award.”

“One of the great things about being a seminary for the entire church is serving the many facets of that same church,” noted the Very Rev. Kurt H. Dunkle, Class of 2004 and current Dean and President. “Preparing our lay and ordained leaders to help with addiction issues is a vital part of leadership. Ward Ewing and Stuart Hoke were ahead of their times in making sure this was part of our curriculum so many years ago and we salute them for their farsightedness.”

“As I travel around the country, as soon as I say the words ‘Episcopal recovery,’ the response I hear is ‘Do you know Stuart Hoke?’ Stuart is traveling all over the country, ministering to those who need to hear the good news of recovery for all God’s children,” said the Rev. Deacon Lisa Kirby, President of Recovery Ministries of the Episcopal Church. “I delight in Stuart’s wisdom and humor and can think of no more worthy person to receive this year’s Sam Shoemaker Award.”

In a recent telephone interview, Hoke mentioned the words of Bill W., founder of Alcoholics Anonymous: “Showing others who suffer how we were given help is the very thing which makes life seem so worthwhile to us now. Cling to the thought that, in God’s hands, the dark past is the greatest possession you have—the key to life and happiness for others.” Hoke uses those words to describe his own focus over the past 30 years as a teacher, pastor, priest, mentor and spiritual guide.

Since moving to North Carolina in 2008, Hoke has worked as a supply priest throughout the Dioceses of North Carolina and South Carolina, and currently serves as the part-time Vicar at All Saints Episcopal Church in Hamlet, North Carolina. Committed to “spreading the word” about recovery and grace, he is a frequent guest preacher and conference and retreat leader.

Hoke became affiliated with Recovery Ministries of the Episcopal Church in the early 1990s. “I consider addiction to be one of the most significant pastoral issues facing the Church. Bridging the gap between the church and recovery has been my crusade since 1987,” he continued. “In both Amarillo and Houston I led Sunday school classes called ‘Spiritual Awakenings.’ The goal of these classes was to illustrate the strong connection between the tenets of Christianity and the principles of 12-step Spirituality.

“I have been personally involved in recovery for the past 30 years,” he said, calling his involvement redemptive. “This is it. I have received an outpouring of grace, a connection with a fellowship of recovering people, and an opportunity to become the priest that I was called to be in the first place.”

Born in Memphis, Tennessee, and raised across the river in northeast Arkansas, Hoke graduated from Southern Methodist University in Dallas and received his M.Div. from the Episcopal Divinity School in Cambridge, Massachusetts, before attending The General Theological Seminary.

Ordained in 1972, Hoke spent the greater part of his ministry serving congregations in Arkansas and Texas. After completing the S.T.M and Th.D. degrees at General Seminary, he served as Executive Assistant to the Rector of Trinity Wall Street from 2000-2008, and also as missioner to St. Paul’s Chapel at Ground Zero following the terrorist attacks on the World Trade Center in September 2001. Hoke moved to North Carolina in 2008.

Recovery Ministries of the Episcopal Church was originally known as the National Episcopal Coalition on Alcohol and Drug Abuse. RMEC is now a separate 501(c)(3) organization of clergy and laity, led by an all-volunteer board. It has been instrumental in bringing the issues of addiction and recovery to the attention of the General Convention, most recently the 2015 resolutions regarding alcohol use and abuse in church settings.

The Samuel Shoemaker Award is given on an occasional basis. Previous honorees receiving the award include: Betty Ford, the Rev. David Works, the Rt. Rev. David Richards, and Pia Mellody, all major contributors to the spiritual healing of addictions.