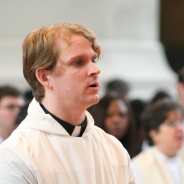 The Rev. Travis Smith, Class of 2005, after three years as Rector of Grace Church in Elkridge, Maryland, has led a turnaround in the parish’s financial and missional stability. Grace is made up of two properties, the Historic Stone Church consecrated in 1911, and a new facility, built in 2002 to house an Early Childhood Center. When he arrived in 2013, he found a $91,000 operating deficit and their bank calling the remaining $700,000 on the loan taken out to create the school. Although the money had been spent, the school had not become financially viable. On a recent visit to General, Smith told us that with “a vision grounded in faith, collaboration, and diversification of revenue streams,” he set out “engage and build trust in the community.”

Smith, who has three children himself, has spent much of his ministry “envisioning how church can reach out to children.” He wanted to create a space at the Church School where “everyone in the parish could flourish. Growing the congregation went hand in hand with engaging the community through the school,” which now incorporates an Early Childhood Center with a Family Life Center. He saw that Grace had been “great at building, but not at sustaining, and that’s what we’re learning.”

“The parish is learning that our resources aren’t money, they are people,” Smith went on, “all it takes is time together and letting them know how much I love them and how much God loves them.”

As General lives into its missional responsibility to grow our church, the Rev. Travis Smith is a model for us all.