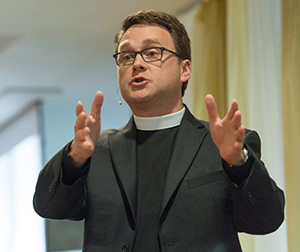 The Rev. Kevin S. Brown, Class of 2007 was elected 11th Bishop of Delaware at a special convention on July 15, 2017. He was elected on the fifth ballot at St. Anne’s Episcopal School in Middletown, according to a news release issued by the Episcopal Diocese of Delaware.

Brown has been the Rector of Holy Comforter Church in Charlotte, NC since 2010. He previously served as rector of Grace Episcopal Church in Paris, TN. At Holy Comforter he led the merger of separate English and Spanish preschools into a single groundbreaking school focused on bilingual education and dedicated to access for low-income immigrant families.

A native of Asheville, North Carolina, Brown studied mathematics and psychology at Duke University and completed his MBA from the University of West Florida while in the U.S. Air Force.  He worked in finance and marketing for FedEx Corp. and then at the investment banking firm Coolidge & Co. of Memphis before the call to ordained ministry. He was ordained deacon and priest in 2007.

“I had no inkling of priesthood until my early thirties, a few years after starting a family, buying a house, and building a career,” Brown wrote in a narrative biographical statement [PDF].   “Though I was ‘successful,’ I was shaken by an urgent question. I knew I could teach my daughters to work hard and find good jobs. But could I, their father, lead them toward a life worth living? What is a life worth living? My priorities were upended. I found myself praying seriously for the first time in my life, and I learned firsthand that honest prayer can rock your world. Within a few years my family and I were at General Seminary marching toward an unexpected future.”

Brown was one of five nominees for the position. Election required winning a two-thirds majority among both clergy and laity.

As Bishop, Brown will shepherd 9,300 Episcopalians in 34 congregations throughout Delaware. Additionally, he will continue to take “a leadership role in social justice issues on a statewide level”, according to the release.

He will be ordained and consecrated on Dec. 9 by the Most Rev. Michael B. Curry at Delaware State University in Dover. Brown succeeds the Rt. Rev. Wayne P. Wright, who retired in February.

His wife, Caroline, is an accomplished artist, and they have two daughters in college in North Carolina.