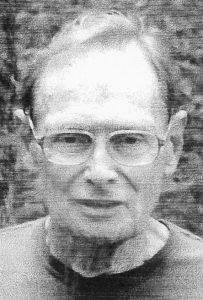 The Rev. Thomas Droppers, Class of 1956, widely known throughout North Carolina for his passion and commitment for the environment, died July 21, 2017, following a period of declining health. Fr. Droppers, 86, was retired after 61 years of service in the Episcopal ministry.

Droppers was born in Albany, NY March 30, 1931, the son of Seton Rand Droppers and Margaret Evelyn Droppers. He was a 1953 graduate of Hamilton College in Clinton, NY before attending General. His first assignment was to St. George’s Episcopal Church in Schenectady, NY, where he served as a curate. In 1959, he moved to North Carolina, and during the next 58 years he served churches in Kings Mountain, Black Mountain, Huntersville, and Greensboro.

Since his retirement in 1994, he has been a frequent supply priest, serving churches throughout the Diocese of North Carolina, and for 15 years he served as chair of the chartered commission on environmental stewardship in the Diocese of North Carolina. In addition, he assisted with pastoral care at the Church of the Holy Spirit for 23 years. His commitment to God’s creation was evident in his preaching and his teaching and in his daily life as well. He loved hiking trails, paddling his canoe, and flying kites. He was an advocate of community gardens, a volunteer at the Urban Ministry breakfast program, a frequent participant at Timberlake Farms, where he followed the work of Thomas Berry.

A devoted family man, he is survived by is wife of 58 years, Mary Ellen Droppers; daughters Louisa Rand Lake (Jim), Margaret Elizabeth Castleberry (Brian), and Gwendolyn Renee Lofland; and son, James Randolph Droppers, as well as four grandchildren and extended family. His legacy, expressed by his legions of friends, was that he served humbly the God he loved. Memorials may be made to the Episcopal Church of the Holy Spirit, 3910 Yanceyville Street, Greensboro, NC 27407, to be used for local outreach in the fight against hunger and homelessness, or to Episcopal Relief and Development, to aid in world relief of hunger and poverty.