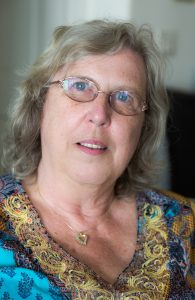 The Alumni Executive Committee of The General Theological Seminary is delighted to announce that the Rev. Deacon Geraldine Swanson, Class of 2008, is the recipient of the 2018 Distinguished Alumni Award.  Swanson is the deacon to the Richmond Episcopal Ministry overseeing the development of new ministries on Staten Island, NY and helping existing congregations revamp their vision for the future due to changing demographics and resources.

Swanson’s diaconal ministry has been centered on serving under-represented populations in multiple roles of leadership coordination and direction, of a soup kitchen, an afterschool music program, and the Staten Island Hunger Task Force and Coalition for Housing Equality.

Ordained a deacon in the Diocese of New York in 1997, Swanson has served over 25 years as an educator in both public and private schools in New York City, both in the classroom and as a mentor to new teachers, trainer of teacher mentors, and staff developer. She has been elected to the Board of Directors of the Association for Episcopal Deacons for two terms, coordinated the Triennial Assembly in 2016, and is now serving on the Board of the Fund for the Diaconate.

A resident of Staten Island, Swanson filled multiple roles aiding relief in the aftermath of Hurricane Sandy.  Her efforts included setting up the parish hall for community needs, creating a drop-off center for donated food and clothing, providing meals for folks without kitchens, and arranging work crews from Manhattan parishes.  While volunteering in a Sandy Relief Center, she visited every Episcopal parish on Staten Island, checking on status to report findings to the Bishop’s office, providing additional holiday baskets to families on the heavily hit east and south shores, and supporting the work of “Soup in the Hood” to provide hot lunches for residents for residents of the Midland Beach community for a full year after the hurricane hit. Swanson was also a member of the Disaster Relief Committee, and ad hoc IPC Committee for the “Heart of the Home” Initiative, reviewing and approving renovations to kitchens in rebuilt homes with funds from Trinity Wall Street/Diocese of NY and ERD.

The Distinguished Alumni Award was created in 2004 to recognize and hold up Seminary degree holders with both extraordinarily original, path breaking ministries and extraordinarily faithful, though quiet ministries. Nominations are now being accepted for the 2019 Award. Contact gtsalumniae@gts.edu for more information.

The Distinguished Alumni Award will be presented to Swanson at the Memorial Eucharist May 15, 2018, during the next annual Alumni Gathering.