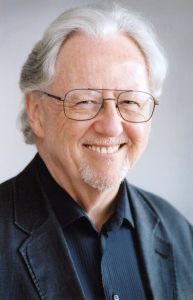 The Rev. Donald Edward Grayston, Class of 1963, died October 23, 2017 in Vancouver, B.C., after a long battle with pulmonary fibrosis. Born August 31, 1939 to Marion Houston Macdonald Grayston and Edward Walter Grayston, he is survived by children, Megan (Rick Bohonis), Rebekah (Mark Edwin) and Jonathan, sister and brother-in-law, Helen and Douglas Williams, other relatives and friends.  Grayston was married to Mary-Virginia (Ginger) Shaw, a lay minister at the American Episcopal church in Geneva from 1969 until 1992.

An Anglican priest who worked in many different ministries, a teacher of Religious Studies at Simon Fraser University, an activist in the interests of justice and peace, and a longtime student of the life and work of Thomas Merton, he was past president of the Thomas Merton Society of Canada and the International Thomas Merton Society.  His memorial service, reception to follow, will take place on November 15th, 2017, with a viewing at 2 p.m. and service at 2:30 p.m., at Christ Church Cathedral, 690 Burrard Street (at Georgia) in Vancouver.

At the age of 13, Grayston attended a two-week session at Artaban, the Anglican camp on Gambier Island. It was here that his faith came alive; within two months of his time there he had decided to be ordained. He graduated from the University of British Columbia with First Class Honours in 1960.  For his 17th birthday, his sister gave him Archbishop Trevor Huddleston’s book about apartheid in South Africa, Naught for Your Comfort. He wrote to the author, a correspondence which led to his going for the first two years of theological study to the school maintained by Huddleston’s community, the College of the Resurrection, at Mirfield, West Yorkshire, in England. He did his third year at General, receiving his MDiv cum laude in May 1963. He was ordained deacon on September 8, 1963, and appointed as assistant to Bernard Barrett, rector of St Andrew’s Church, Trail, where he was ordained priest on April 7, 1964.

After an interim year at Sorrento Centre, and two years in Rossland, where he was also Anglican-United chaplain at Selkirk College, Castlegar, he went to Toronto, where he received a ThM from Trinity College, and a PhD from St Michael’s College, both in the Toronto School of Theology in the University of Toronto. It was at St Michael’s that he began his study of Thomas Merton, an interest which he maintained to the end of his life.

From 1977 to 1985 he was rector of All Saints’ Church in Burnaby. During this time he became aware of the terrible peril from nuclear weapons in which the planet stood and still stands. In 1985 he founded the Shalom Institute, the work of which was focused on the place of justice and peace issues in theological education in Canada. Out of this grew the Pacific Jubilee Program in Spiritual Formation and Spiritual Direction, launched in 1988 and still active.

In 1989 he began teaching Religious Studies at Simon Fraser University. For the last three years at SFU, he was director of the Institute for the Humanities, retiring as then required by law in 2004. He did some post-retirement teaching at SFU, and in 2006 undertook a 600K walk in Britain, from Land’s End to Newcastle. In the cathedral in Newcastle he experienced three epiphanies, which convinced him that his walk had become a pilgrimage. The third of these was a memory of a sermon he had heard at a youth conference 47 years earlier, a riff on the letters of the organization, AYPA. The preacher, Bishop Ralph Dean, took those letters to represent All Your Past Absolved, All Your Present Accepted, All Your Potential Assured. At that moment, a memory became a felt experience.

Having learned something of the Israeli-Palestinian conflict from a student in the last course he taught on the Holocaust, he committed the remainder of his active retirement (2007-14) to raising the consciousness of Canadians to the realities of that conflict through programs of public education. He regarded this issue as having the same level of moral claim on contemporary Christians as had the civil rights issue in its time. Finding stronger support for this viewpoint in the United Church than in the Anglican Church, he divided his church time of the last few years between the two churches.