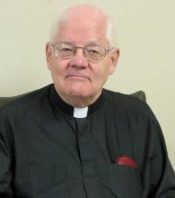 We heard from the Rev. Thomas N. Rightmyer, Class of 1966, that at age 78 he has been called to be part-time Pastor/Priest at The Church of the Savior, Newland, NC.

“Episcopalians and Lutherans have been worshipping together in the High Country of North Carolina since 1983,” Rightmyer reports. “First and second Sundays we use the Book of Common Prayer and the Hymnal 1982; third and fourth Sundays we use the Evangelical Lutheran Worship hymnal. Fifth Sundays alternate.” On October 29, 2017 Rightmyer’s parish joined with Lutherans and other Christians all over the world to celebrate the 500th anniversary of the beginning of the Reformation.

Rightmyer has served for most of his ministry on various Christian Ecumenical committees, including the Moravian Episcopal Dialogue. He is excited that he now has “an opportunity to see how it works in a congregation.”